The singer dropped by Central Park's roller disco on Wednesday night to hang with "Like a Virgin" producer Nile Rodgers.

Madonna's many worlds collided in one glittery place on Wednesday night (Aug. 10) when the pop queen skated over to Central Park's DiscOasis roller disco for Madonna night. One special moment during the visit to the four-wheeled fantasia curated by her Live a Virgin producer, Chic's Nile Rodgers, found the pair dancing to the "Queens" remix of Beyoncé's Break My Soul.

In footage of the superstar summit, Madonna and Rodgers boogie to the remix's house groove at the special night at the Oasis in celebration of the upcoming 50-track version of her dance remix collection, Finally Enough Love: 50 Number One (Aug. 19) — which features such guests as Justin Timberlake, Britney Spears, Nicki Minaj and Maluma, among others. "Great #record release #party with @madonna @questlove dropping @beyonce #breakmysoul @discoasis," Rodgers captioned a video of the dance duet, which was overlaid with the message, "If you want a great party throw it with Madonna at the DiscOasis."

The night's DJ, the Roots' Questlove, was pretty blown away by the scene as well, posting his own video and a lengthy message about the epic pop conclave. "Kinda mind blown that @NileRodgers been curating these roller skating jams," he wrote alongside the clip in which Madonna gives him a shout-out. "This environment was a common occurrence for me in the early 80s. Like that was the event to do on the weekend (s/o to USA in philly & Elmwood too!). Fun too! Besides the Prince night back in 2006 I haven't gotten much Roll Bouncing on (well I didn't tonight either i dj'd. s/o out Madge for conquering a fear and skating while the entire world IG lived her—-I can't imagine that kinda scrutiny)—-but yeah man I rarely find parties that have me rock something other than my open format 101 hip hop/soul/pop shtick."

Bey unveiled their remix last week and on Tuesday (Aug. 9) Queen Bey expressed her gratitude for her collaborator. "Thank you, Queen," Bey wrote about the redo of the song from her Renaissance album that interpolates Madonna's 1990s classic Hot 100 No. 1 Vogue while paying tribute to such iconic Black female artists as Aretha Franklin, Robert Flack, Grace Jones, Erykah Badu, Janet Jackson and Diana Ross, as well as a number of ballroom legends.

"I'm so grateful for you. You have opened so many doors for so many women. You are masterpiece genius."

Madonna has been on The Tonight Show with Jimmy Fallon to promote her remix album Finally Enough Love: 50 Number Ones. Watch a few highlights below.

In her Instagram stories, Madonna has shown off the flowers that she received from Beyonce. In the accompanying note, Beyonce thanks Madonna for approving the remix of Break My Soul. And she reveals that it was Madonna who named the remix.

Thank You, Queen. I'm So Grateful For You. You Have Opened So Many Doors For So Many Women. You Are Masterpiece Genius.

Love Always And Forever,
B

Beyonce has released The Queens Remix of her successful single Break My Soul, which mixes the track with Madonna's Vogue.

It seems Madonna didn't record any new vocals for the track, it uses the originals from the 1990 #1 hit single.

Beyonce has re-interpreted the rap, paying tribute to black singers, as well as to Madonna herself:

As the original Vogue paid tribute to the Vogue subculture of New York, which saw Vogueing battles between different Ballroom Houses, Beyonce also namedrops several of these Houses.

Obviously, many media outlets are raving about the collaboration:

Rolling Stone: "The percolating remix interpolates Madonna’s “Vogue” with Beyoncé flipping the script for the iconic spoke-sung section of the 1990 song, where the Material Girl lists Hollywood stars from the Golden Age. In Bey’s take, she pays homage to both current and past influential Black women who have been game-changers for the culture"

Entertainment Weekly: "Long may they reign. Beyoncé and Madonna join forces for 'The Queens Remix' of 'Break My Soul'"

Variety: "Emulating Madonna’s classic spoken-word section of “Vogue,” Bey name-drops iconic Black women in music, from Aaliyah to Nina Simone to her sister, Solange Knowles. Of course, Beyoncé also shouts out Madonna, who doesn’t seem to appear on the track other than in the form of a “Vogue” sample."

Madonna has released a new version of Material Girl on digital streaming platforms.

It is based on the version that Saucy Santana recorded himself in 2020, which went viral on Tiktok. 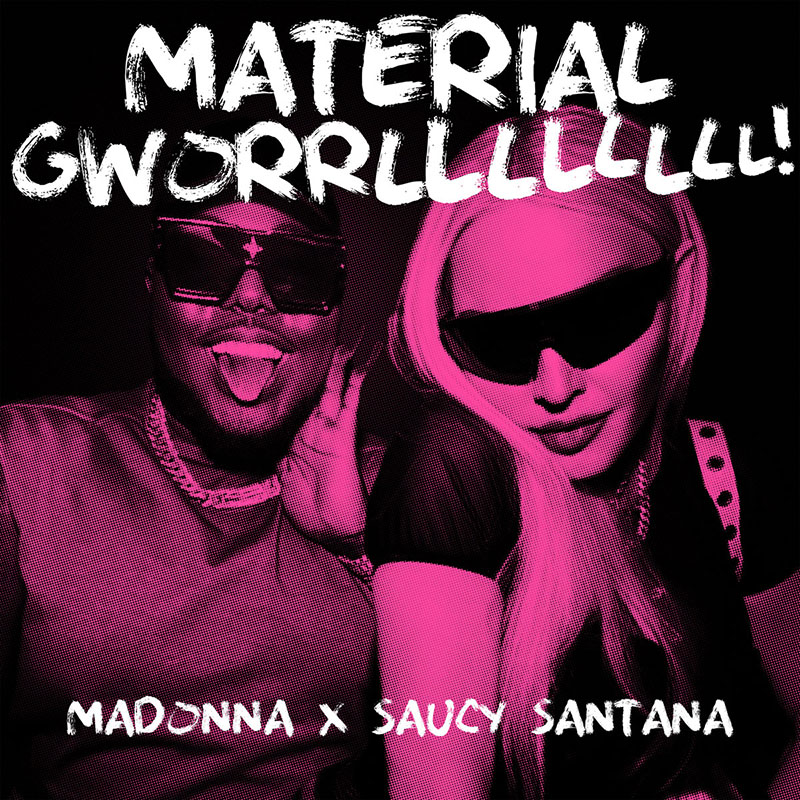