Billboard.com posted a summary of Madonna's upcoming release, so now we take this chance to look at the CD & DVD tracklists together:

The Wembley Arena stop on Madonna's box-office busting Confessions tour will be released as part of a CD/DVD set Jan. 30 via Warner Bros. Portions of the DVD were originally broadcast during an NBC special over Thanksgiving. 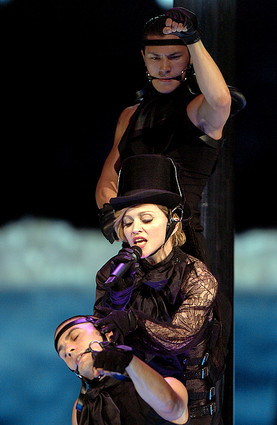 "The Confessions Tour" includes a 13-track CD as well as the complete London concert on the DVD disc, including four songs that didn't air on TV and an uncensored version of Live To Tell.
The track list focuses largely on Madonna's 2005 album Confessions On A Dance Floor but also sports oldies such as Like A Virgin, Erotica, Lucky Star and La Isla Bonita.

Meanwhile, Madonna is up for three Grammys at the Feb. 11 ceremony: Get Together for best dance recording, I'm Going To Tell You A Secret for best long form music video and Confessions on A Dance Floor for best electronic/dance album.

Here is the track list for "The Confessions Tour":

Let It Will Be